I recently passed the two year mark in my first major/official role as a “manager” of anything.  I’ve been the lead of a team which now consists of 7 souls and I’ve learned (i.e. screwed up repeatedly and had the idea pounded into me) a few things along the way about what it means to “lead… a team”.

It’s a departure from my normal technical-oriented posts, but I’m having a hard time with motivation to post those right now so I have to blog where the mood strikes me. Right now I have an itch to scratch about leadership and learning how to be in “charge” of something.

Deflect the Praise to Those Who Earned It

I try to remember this whenever I receive any praise for any of the work related to the work that the team may have done. Even if I myself had achieved something individually, it would only have been possible on the steps and rungs laid by the team. In just about every circumstance, however, it’s something they achieved. This is my favorite quote in this regard (I cannot find the citation anywhere! I lost it! Can someone help me identify this paraphrased quote?):

Get Out of Their Way

A good leader leads best by pointing the team in the right direction and getting out of the way. This simple concept is quite possibly the hardest (for me, at least) to learn. My instinct is to control, guide, and move the process along, handing out tasks like a task master. However, this usually makes things go much slower and I become a bottleneck and a vice upon the imagination and ingenuity of the team.  The team is a team because multiple heads thinking on a problem is always better than one. If I get in the way, I become a limiting factor and limit things to my imagination and the team and project suffer greatly.

I’m reminded of this “Mantovational” poster by one of my favorite blogs: Art of Manliness.  It focuses on various motivational quotes by (in this instance) George S. Patton: 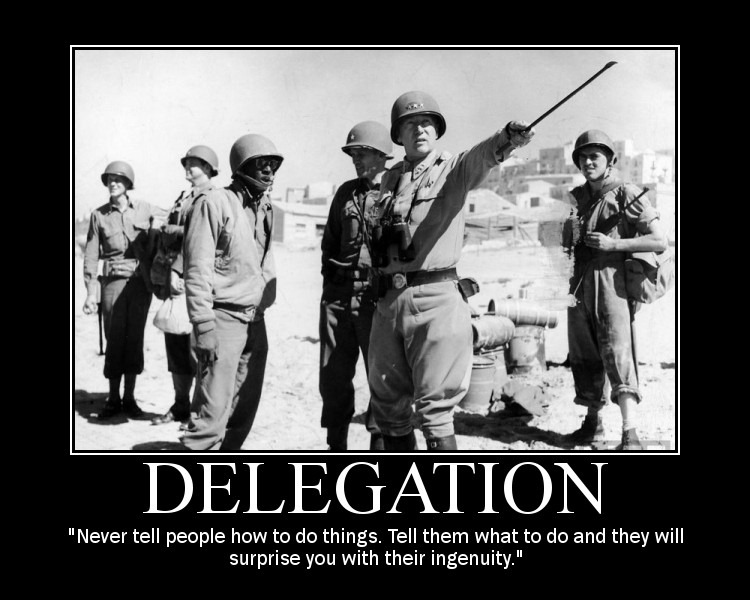 I need to get this thing tattooed onto the back of my eyelids, seriously.

Another key thing about being a leader is to have a set of operating principles that you follow consistently and clearly and set the direction of the team based on those principles.  They can execute you just need to point them in the right direction and get out of the way!

This concepts flows from another quote from Patton from that same link above:

A leader is a man who can adapt principles to circumstances

The Problem of saying “We should”

Or maybe this section should be titled: “The Royal Worthless We”

Only just recently Gary Sherman made me aware of this leadership-fail phenomenon which is so prevalent in our society.  To my shock and horror, ever since I became aware of it, I found myself doing it often. TOO often. What is it?

Ever have someone come up to you with a good idea, but something you didn’t want to, or didn’t think you could deal with it right now and so you said, “Yes, that’s a good idea, we should definitely do that?”  Now consider how many times whatever that idea was actually got done.  In my observation, those “we should do that” ideas usually end up in the scrap pile of forgotten ideas.

As a leader, your response should be “Yes, do it” or “Yes, great idea,

You’ll hate me and Gary now for this because you will start seeing and hearing it everywhere. It’s systemic in our leader-weak society. Don’t believe me? Check this video out: