In the last installment of our series, we discussed the topic of Context Obscurity along with strategies for avoiding the creation of obscure tests. As the final topic of this series, we’ll take an introductory look at the practice of writing Automated Acceptance Tests.

Acceptance testing is the process of validating the behavior of a system from end-to-end. That is to say, acceptance tests ask the question: “When all the pieces are put together, does it work?” Often, when components are designed in isolation at the component or unit level, issues are discovered at the point those components are integrated together. Regression in system behavior can also occur after an initial successful integration of the system due to on-going development without the protection of an end-to-end regression test suite.

The relationship of A-TDD to TDD can be expressed as two concentric processes where the outer process represents the authoring of automated acceptance tests which serve as the catalyst for an inner process which represents the implementation of features developed following the TDD methodology. The following diagram depicts this relationship: 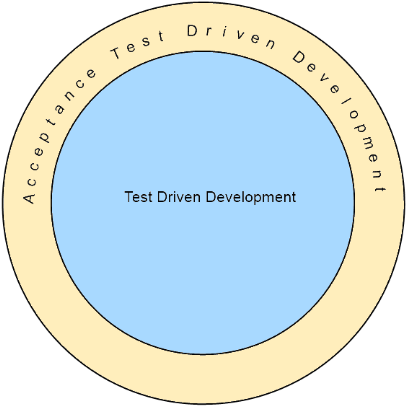 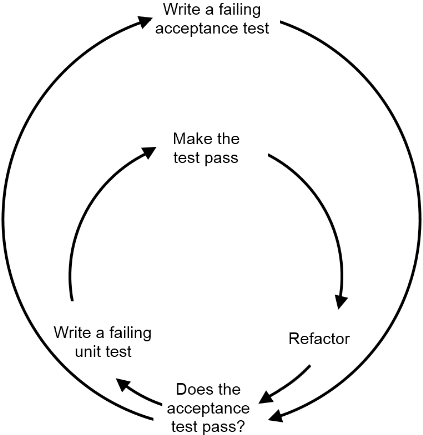 The following is a simple example of an automated acceptance test for testing a feature to be developed for a Web commerce application. This test will validate that the first five products in the system are displayed to the user upon visiting the landing page for the site. The tools we’ll be using to implement our acceptance test are the Machine.Specifications library (a.k.a. MSpec) and the Selenium Web UI testing library.

A Few Recommendations
When testing .Net Web applications on a Windows platform, the following are a few recommendations you may want to consider for establishing your acceptance testing infrastructure:

To keep our example simple, we’ll assume our web site is already deployed as the default site on localhost port 80, that the database utilized by the application is already installed and configured, that our current machine has Firefox installed and that each test will be responsible for launching an instance of Selenium’s FirefoxDriver.

In this test, the Establish delegate is used to set up the expectations for this scenario (i.e. the context). Those expectations include the presence of at least five product records in the database and that a Firefox browser is ready to use. The Because delete is used to initiate our singe action which should trigger our expected outcome. The It delegate is then used to verify that a call to the Selenium WebDriver’s FindElements() method returns exactly five elements with a class of ‘customer’. Upon completion of the test, the Cleanup delegate is used to close the browser.

The intent of this article was merely to introduce the topic of automated acceptance testing since a thorough treatment of the subject is beyond the scope of this series. For further reading on this topic, I highly recommend the book Growing Object-Oriented Software Guided By Tests by Steve Freeman and Nat Pryce. While written from a Java perspective, this book is an excellent guide to Acceptance Test Driven Development and test writing practices in general.

This article concludes the Effective Tests series.  I hope it will serve as a useful resource for the software development community.