Today, the twitterverse that I follow reminded me of the Monty Python “Bring out yer dead!” skit at the beginning of the quest for the holy grail. If you don’t know what I’m referring to, watch this:

The “I’m not dead yet” victim, today, is IronRuby as the majority of the .NET developers I am following on twitter are quick to declare “ironruby is dead”. 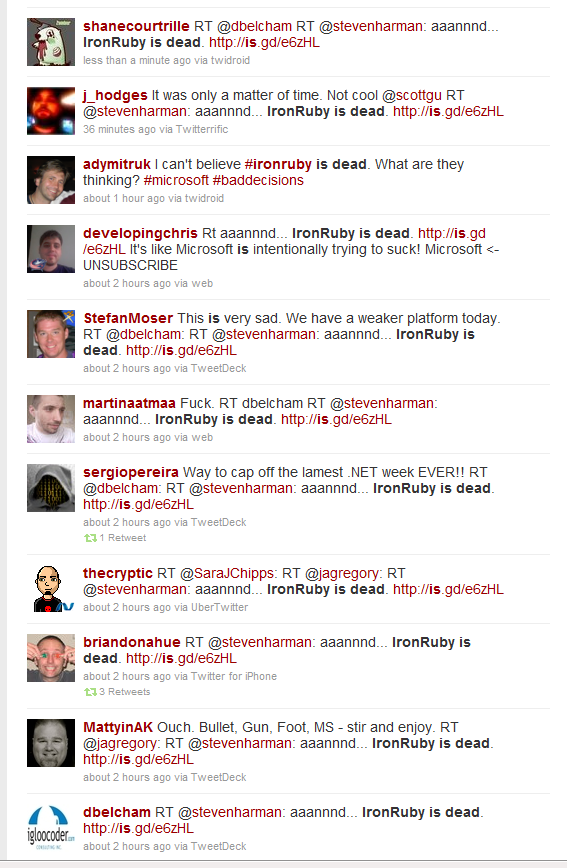 A Troubled Future For The DLR And IronRuby

It all started with a blog post from Jimmy Schementi. If you haven’t read this post, go read it now.

Yes, the contents of his post are infuriating. Once again, Microsoft has dropped the ball on what had the potential to be a tremendous advancement in the .NET world: the DLR and the Iron* dynamic languages. Yes, I’m disappointed in what Microsoft is doing, but I’m not surprised. Yes, I’m sad that IronRuby is not getting the kind of love and attention (and funding!) that I think it should be getting. Yes, I want to bitch and moan about it.

Yes, it looks like the future of IronRuby is going to be slow going for a while. But I would hardly say ironruby is dead at this point. More than anything, though, I’m disappointed with the immediate response of the .NET community, as shown in the above screen shot of a twitter search I did.

While the .NET community is so quick to jump on the bandwagon of dismissing IronRuby and claiming it’s dead, trying to dump the body on the passing cart, Jimmy and his former coworker that he mentioned are probably wondering why no one is hearing IronRuby say “I’m not dead yet!”

Here’s the the thing, people… I know this may be shocking or unappetizing or whatever… but it’s the obvious point that I’m trying to make in this post:

IronRuby Will Only Die If We Let It Die. It’s Open Source for crying out loud! If you don’t want it to die, CONTRIBUTE!

Now, I do understand that Jimmy’s post was talking about the DLR at large, and not just IronRuby. And yes, it is worrying that the DLR is not getting funding, either.

Do Something About It

I’m going to say this again, because it needs to be repeated: IronRuby Will Only Die If We Let It Die. It’s Open Source for crying out loud! If you don’t want it to die, CONTRIBUTE!