Let Me Teach You Arduino, With JavaScript!

Ever wanted an excuse to learn Arduino, but don’t want to learn C/C++? Don’t worry. I’ve got you covered.

I’ve published three articles on the Safari Books Online blog that show you how to take your existing JavaScript skillz and turn them in to a powerful force of hardware and blinking LED lights … and you’ll build yourself a #BBQDuino, too! And, I might be writing a book, too (skip to the end for more info on that)!

Part 1 of the series, JavaScript Powered Arduino With Johnny Five, takes you through the basics from plugging in your Arduino for the first time, to getting some LED lights to blink, using a breadboard. This is the bare minimum start-up post that shows you how to make your computer run JavaScript with NodeJS and Rick Waldron’s Johnny-Five framework, and have it control an Arduino Uno. 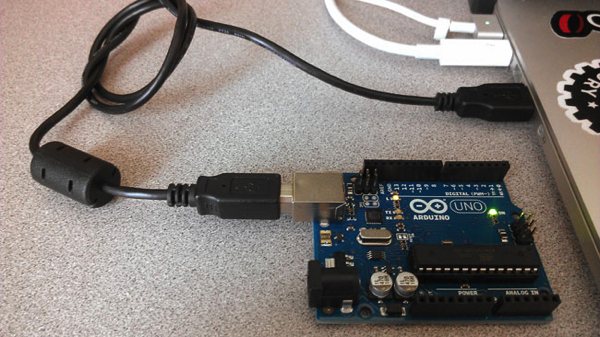 Part 2 of the series, Building An Arduino Powered BBQ Thermometer, builds on the lessons that you learned in the first article. It takes you from blinking lights in to the world of championship BBQ cooking! Or, at least, the ability to monitor temperatures with your Arduino and report on the results with – you guessed it – an LED (though it doesn’t blink this time). You’ll learn what a “thermistor” is, how to hook it up to your Arduino, and what you need Johnny-Five to do, to read data from it and make decisions based on temperatures. 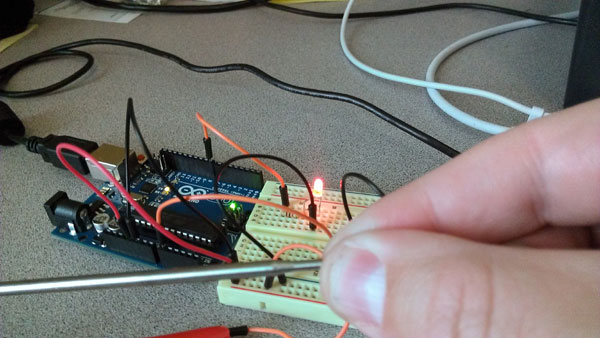 Part 3 of the series, Arduino: Show Me The Temperature!, completes the series by adding an LCD display to the BBQ thermometer. You’ll go from a binary signal LED to a complete thermometer with both Fahrenheit and Celsius temperature displays! 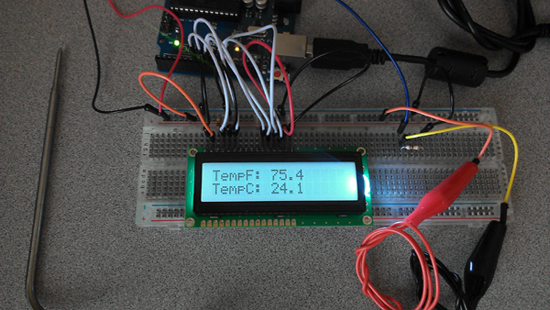