What is Bad Design?

Let’s first discuss a little bit about what bad design is. Is bad design when somebody claims

That’s not the way I would have done it…

Well, sorry, but this is not a valid measure for the quality of the design! This statement is purely based on personal preferences. So let’s find other, better criteria to define bad design. If a system exhibits any or all of the following three traits then we have identified bad design

Let’s now have a look a the latter of the traits of bad design mentioned above. A design is immobile when the desirable parts of the design are highly dependent upon other details that are not desired.

Imagine a sample where we have developed a class which contains a highly sophisticated encryption algorithm. This class takes as an input a source file name and a target file name. The content to encrypt is then read from the source file and the encrypted content is written to the target file.

Listing 1: Encryption Service depending on Details

The problem with the above class is that it is highly coupled to a certain input and output. In this case input and output are both files. But you might have invested quite some time and resources to develop the encryption algorithm which is the core responsibility of this service. It’s a shame that this encryption algorithm cannot be used in another context where the content to be encrypted is not present in a file but rather in a database and also where the encrypted content should not be written to a file but rather sent to a web service.

Certainly we could make the above service more flexible and change it’s implementation. We can put in place a switch for the content source type and one for the destination type of the encrypted content.

However this adds new interdependencies to the system. As time goes on, and more and more source and/or destination types must participate in the encryption program, the “Encrypt” method will be littered with switch/case statements and will be dependent upon many lower level modules. It will eventually become rigid and fragile.

Comes the dependency inversion principle to the rescue.

One way to characterize the problem above is to notice that the method containing the high level policy, i.e. the Encrypt method , is dependent upon the low level detailed method that it controls. (i.e. GetFromFile and WriteToWebService). If we could find a way to make the Encrypt method independent of the details that it controls, then we could reuse it freely. We could produce other applications which used this service to encrypt content originating from any content source to any destination.

Consider the simple class diagram below. 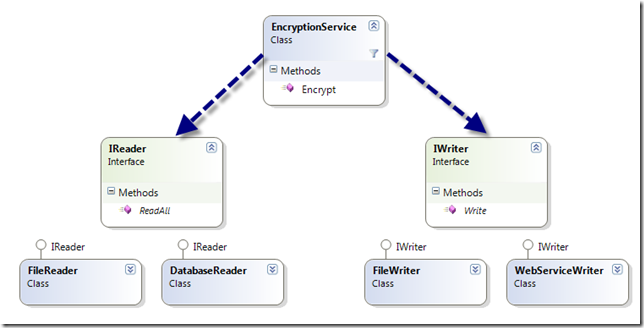 The Encrypt method uses the “Reader” to get the content and sends the encrypted content to the “Writer”.

Listing 3: Encryption Service only depending upon Abstractions

The Encrypt method of the encryption service is now independent of a specific content reader or writer. The dependencies have been inverted; the EncryptionService class depends upon abstractions, and the detailed readers and writers depend upon the same abstractions.

The definition of the two interfaces used is

Why call it dependency inversion?

When a component does not depend on lower level components directly but only through abstractions this component is mobile – that is, the component is reusable in many different contexts.

Furthermore when the design is respecting the dependency inversion principle an application is less brittle or fragile. If some changes have to be made to a low level module there are no side effects to be expected that manifest themselves in other (possibly unexpected) parts of the system.