In this post I am discussing services and how they are constructed and tested. The list of earlier posts in this series about Angular JS can be found here.

What is a service?

In Angular a service is a function or an object and is used to share data and/or behavior across controllers, directives, filters, other services etc. A service is treated as a singleton, that is there is only one instance of a specific service available during the whole lifetime of the Angular application. This is different from e.g. a controller of which many instances can be created.

How to create a service

There are different ways how we can define a service in Angular JS.

The easiest way is to use the Service recipe of an angular module.

Once defined this service can be used in any place, e.g. a controller through dependency injection

A service can of course also have external dependencies similar to a controller. We can inject those dependencies accordingly. Here our service uses the $location service of Angular JS

Here is a simple sample of a service that can calculate the area and the circumference of a circle give the radius. This service is not dependent on any other service. 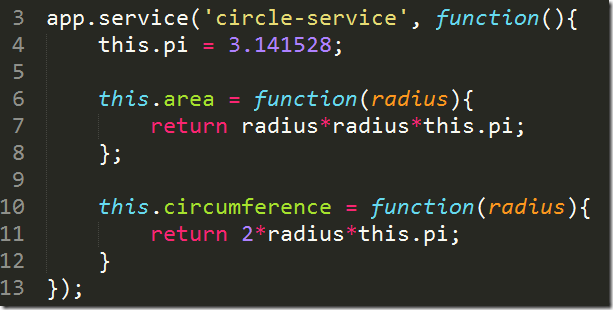 On line 4 we define some data, in this case the value of PI. Then we have a function area defined on line 6 to 8 and a function circumference on line 10 to 12.

When doing TDD we need of course to know how we can test a service. This is straight forward. First we need to setup the context

Then we make sure that the Angular $injector is fully configured by calling the module function defined on window. module is a shortcut for angular.mock.module which in turn is defined in the angular-mocks.js library that we use during testing.

The module function parses the whole Angular module we defined and registers all controllers, services, etc. It sets up also mocks for some of the Angular services like $httpBackend, $timeout, $browser etc.

Next we use the $injector to resolve the service

Finally we can formulate our expectations, first for the value of PI

and then for the two functions calculating area and circumference

Instead of defining the service directly using the Service recipe of the Angular module we can also use the Factory recipe and define a factory function which will create the service on request.

This is slightly more complicated but offers also some more fine grain control. To do this we use the factory function of the Angular module

The purpose of the service factory function is to generate the single object, or function, that represents the service to the rest of the application.

Returning an object as a service

here we have defined an object with 3 properties of which two are functions and one is just data.

How can we test this service? Well when testing it really doesn’t make a difference whether the service is resolved via a factory function or directly. Thus the tests look very similar to what we saw earlier in this section 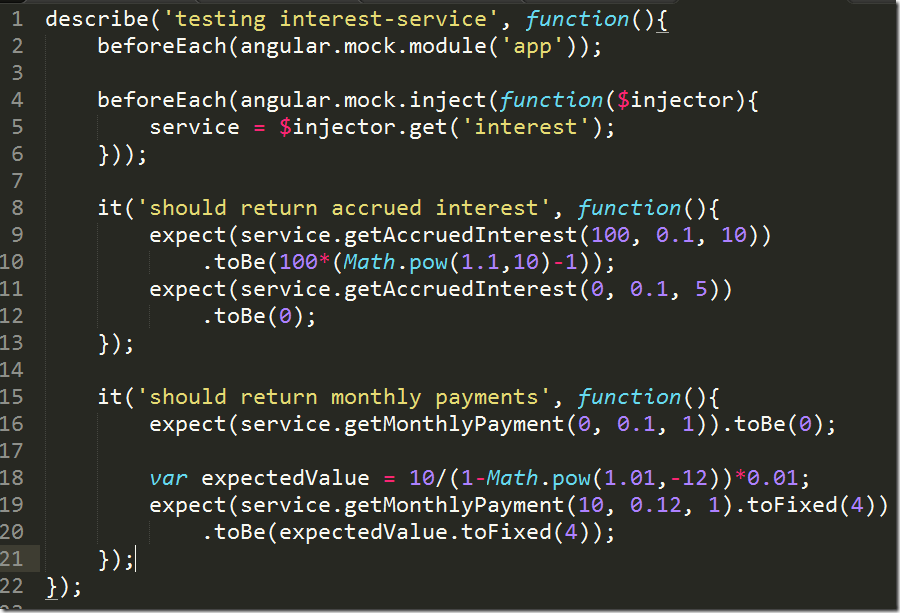 Please note that on line 2 I use the explicit angular.mock.module notation instead of just module to show that they are indeed equivalent. The latter is just an alias or shortcut defined in the angular-mocks.js library.

Returning a function as service

Here is a simple sample of such a service. The service just sums an array of numbers and returns this value

Once again testing this service is straight forward

The only difference regarding the other tests is that here I skipped the creation of a beforeEach because I really only have one single it function and thus I can do all the setup there.

The Angular documentation states the following

The injector needs to know how to create these objects. You tell it by registering a “recipe” for creating your object with the injector. There are five recipe types. The most verbose, but also the most comprehensive one is a Provider recipe. The remaining four recipe types — Value, Factory, Service and Constant — are just syntactic sugar on top of a provider recipe. …

So far we have discussed the Service and Factory recipe. The Value and Constant recipe are discussed in detail here. The last recipe which is the Provider recipe is fairly complex and rarely used. The Angular team recommends that we only use the Provider recipe if we need to expose an API for application-wide configuration that must be made (to the service) before the application starts. A possible scenario is a reusable service that is used in different modules (or applications/SPAs) and needs to vary slightly between those usages.

Let’s give a sample

On line 2 we use the provider function to register our provider (recipe). On line 6 through 11 we define our service which in this case is an object having two functions sum and average. Since both of these functions need to sum up the array of numbers passed we have defined a helper function sumFn on line 3 to 5 which does exactly that. This function is then used on line 7 and line 10. We also need to implement a $get function which is done on line 13 to 15. Here we just return the service.

How can we test this service?

The tests look very similar to the tests we implemented for the services defined through the Service and the Factory recipe.

We can change our provider as follows 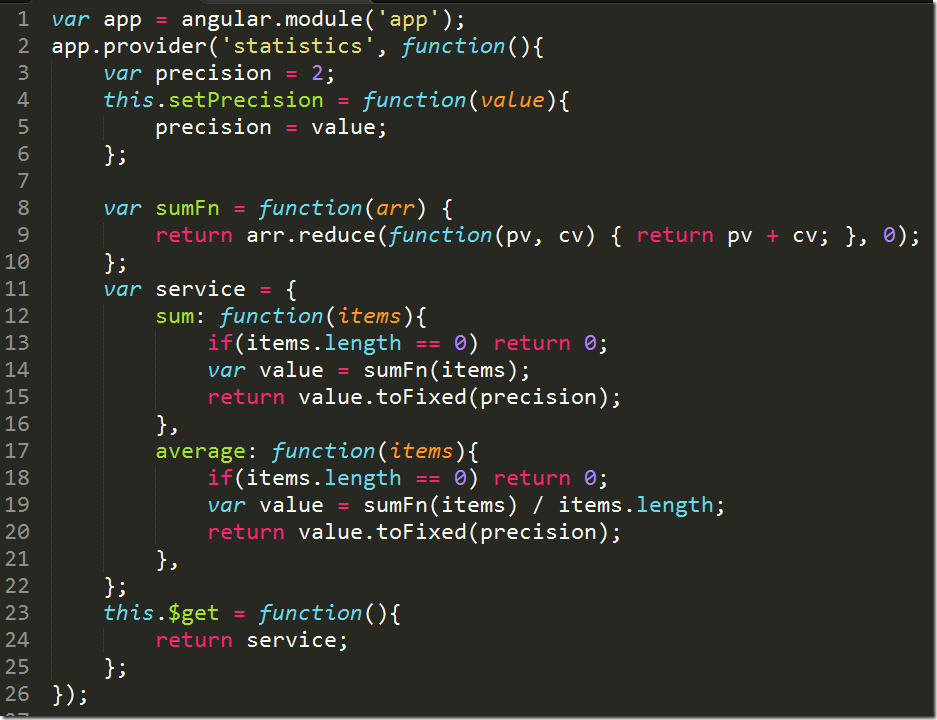 On line 3 to 6 we have introduced the configuration API with the function setPrecision. By default the precision is equal to 2. On line 15 and 20 we use the toFixed function to define the required precision of our return values.

To make all work we also need to change line 2 of our recipe where we define the provider function and use a named function instead of the anonymous function. In our sample we need to call the function statisticsProvider because that is what we are referencing on line 29 above.

Services are important elements of a typical Angular JS application. Services allow us to share data and behavior across other objects like controllers. There exist 5 recipes how a service instance can be created; in this post we have described the Service, Factory and Provider recipes. In the context of Angular services are singletons. It easy and straight forward to test services.