Here’s a few ways to think about Git and it’s distributed nature.

Pushing your changes to a remote: git push remote_name

Or if you want to rebase:

You can change your branch.autosetuprebase to always, to make this the default git pull behaviour.

That’s all there is to moving commits around in Git repositories. Any other operations you perform are all combinations of the above.

When you’re dealing directly with Github, on a personal project or as the project owner, your repositories will look like this:

You can set the defaults for these commands too, so the origin isn’t even necessary in a lot of cases.

As a project owner, you’ll sometimes have to deal with contributions from other people. Each contributor will have their own github repository, and they’ll issue you with a pull request.

There’s no direct link to push between these two repositories; they’re unmanned. To manage changes from contributors, you need to involve your local repository.

You can think of this as taking the shape of a V. 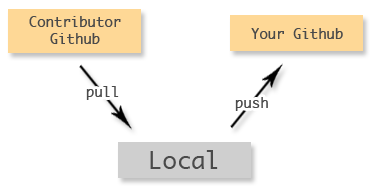 You need to register their github repository as a remote on your local, pull in their changes, merge them, and push them up to your github. This can be done as follows:

Do exactly as you would your own personal project. Local changes, pushed up to your github fork; then issue a pull request. That’s all there is to it.

Here’s how to imagine the whole process, think of it as an N shape. 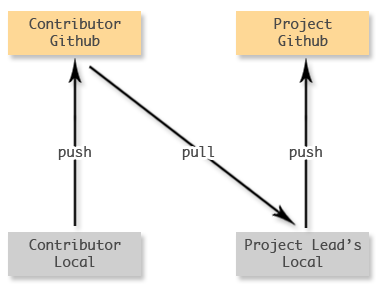 On the left is the contributor, and the right is the project. Flow goes from bottom left, along the lines to the top right.