Often times I run into a class that has a dependency not on a Singleton, but a static class.  When refactoring away from a Singleton, a common approach is to use Inline Singleton.  With static classes, a slightly different approach needs to be taken because client code isn’t working with an instance of a type, but rather static methods on the type itself.

Dependency breaking techniques are used to get legacy code under test.  The goal isn’t necessarily to break all client dependencies out, but just the one I’m modifying to get under test.  I’m not interested changing any of the other clients that may use this static class.  Since nothing is under test, it’s too risky to make non-backwards compatible changes.

Code needs access to a method or property but doesn’t need a global point of access to it.

**Move Static’s features to instance methods of that type.
** 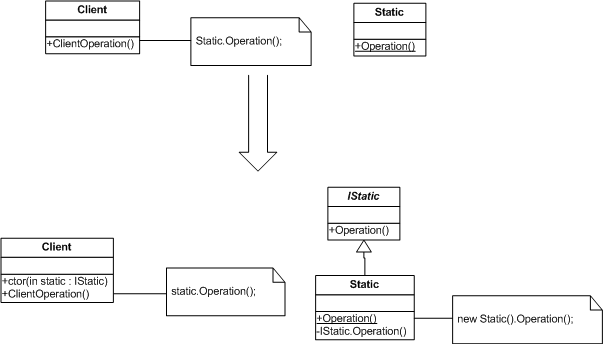 Helper methods tend to congregate into static classes with static methods.  Over time, the responsibility grows for the static class until it becomes a dumping ground to any behavior that seems relevant to the name.  The name of the static class usually is post-fixed by “Helper”, “Manager”, “Utility”, or other generic and obtuse names.

Eventually, this static class will have opaque dependencies of its own, where callers don’t know what’s happening behind the scenes when those helper methods are called.  This can wreak havoc with unit testing, especially when trying to add tests to legacy code.

In our e-commerce system, one of the pages the user is presented with is a payments page.  It is in this page that the user decides how they want to pay for their order, whether it’s credit card, invoice, financing, etc.

Not all payment types should be displayed for all carts, and there is some complex business logic that determines who sees what payment types.  There are several payment filtering strategies to encapsulate this business logic, and one type uses the user’s profile to filter the payments.  Here’s the strategy class:

The business has a new requirement for us: Payment types should not be filtered using the user’s profile for existing quotes.  In our system, customers can save their cart as a “quote”, so that the unit cost information can be “locked” for a set amount of time.  Enabling this change requires us to change the AccountFilter class.

Not knowing if I can unit test this class, the easiest way to see if it’s testable is to try using it in a test.  Here’s the behavior I want, in a unit test:

I try running this test, and it fails spectacularly.  The error I get is along the lines of “HttpContext.Current is null”, so something is dependent on the ASP.NET runtime being up.

ProfileManager is a huge class, with about 100 different methods.  The only one I’m interested in is the FindPaymentByType method, so I’ll create an IProfileManager interface that includes only that method, matching signature and name.

I compile, and everything looks good.  Notice I didn’t add any access modifiers to the new IProfileManager method, and the inclusion of the interface name prefixed on the method name.  That’s how I can explicitly implement the interface, and not get any compile errors even though these two methods have the exact same signature.

Now my static method delegates to the instance methods, and no other clients are affected by this change.  Again, it’s not my goal to fix every client dependency on this static method, only the one I’m changing.

I compile and test, but my initial unit test is failing as it’s still calling the static method.

I create a variable of type IProfileManager, instantiate it to a ProfileManager instance, and use the IProfileManager.FindPaymentByType method instead of the static method.  I compile and test, but my unit test still fails as I still haven’t fully extracted the dependency on the ProfileManager, but that will be taken care of shortly.

I have two options, I can either pass in the IProfileManager as in the method call or I can pass it in through the constructor.  I prefer to pass dependencies through constructors over method parameters, because I like a clear separation between queries, commands, and dependencies.  Additionally, if I’m using an IoC container, I can wire up these dependencies a little more easily.  I’ll use Preserve Signatures [Feathers 312] and Chain Constructors to keep the original constructor, as there are still quite a few clients of my AccountFilter class that I don’t want to change:

So I did a few things here:

What this code allows me to do is pass in a different IProfileManager instance in my test methods to verify my behavior.  I don’t really care what the ProfileManager does, all I care about is what it tells me.  Somewhere down the line, I have an integration test that puts the two together, but until then, my unit test will suffice.  Here’s my final unit test, which fails for the reason I want it to fail, because the assertion fails:

I use RhinoMocks to pass in a mock IProfileManager, and test-driven development to add the functionality desired.  I broke the dependency of the class under test away from the ProfileManager static method, and was able to preserve existing functionality.  By preserving existing interfaces and functionality, I can eliminate much of the risk involved in changing legacy code.  I got my changes in, was able to test them, and kept out of the rabbit-hole that a larger refactoring would have thrown me into.