How to annoy your teammates

Step 1: Perform a change that affects many, many files

My favorite is a namespace rename.  Other choices include deleting a core marker interface, renaming a layer supertype class, or changing the folder structure in a project.

Typically, VisualStudio will crash when I do this, though I’m not sure if it’s VS choking or ReSharper.  Either way, a large automatic refactoring will cause a crash.

Step 2: After the VS crash, re-open the solution and choose to recover all unsaved files

ReSharper likely made it quite a ways through your refactoring before VS crashed.  All those unsaved files were likely cached for recovery by VisualStudio, so you can probably get a lot of those changes back.  Instead of choosing to revert your local changes, go ahead and recover all those files.  It’s key for maximum annoyance.

Step 3: Merge these recovered files back to trunk

Since this was an enormous refactoring, maybe affecting hundreds of files, you’ll want to merge your changes back to trunk as soon as possible.  After all, you don’t want to be the sucker merging after everyone else has finished their work.

When you’re done, your co-workers will be greeted with one annoying merge, and another fun dialog that never seems to quite go away: 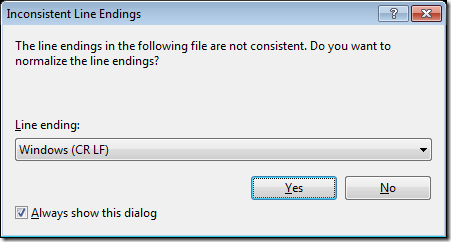 Just when you think you caught the last of the recovered files that had its line endings screwed up, another one pops up.  They’ll hate you once because of the core change that affected so many files, making it quite annoying to merge back to trunk.  But they’ll form that long-lasting, persistent hate because of this dialog box that keeps coming up.  Yes, there is that little checkbox at the bottom, but who reads these things anyway?