I’ve always been intrigued by the idea of stand up desks. Not because of potential health benefits or anything like that, but in general I get a bit tired of sitting all day. I’m a little bit of a spaz, and I’m always twitching or fiddling around with things. Chairs hampered my spaz, so I wanted to make a change.

Unfortunately, most standup desks are either really expensive, or look completely unprofessional. I’m not one of those guys that would rather wear sweatpants and flip flops to work, I’ve got an image to protect, right?

So I was highly intrigued when I read about the affordable IKEA stand up desk. It looked like something that would work for me – functional, yet doesn’t look like I went to the trash heap to scrape random parts together.

So a couple of months ago, I took the plunge and built myself a stand up desk.

I followed the printable instructions fairly closely, with the exception of a slightly different choice of materials. Instead of a plain black Lack table, I went with a black-brown, that is more of an ebony color. Most of the furniture in our office is a very dark wood color, but not straight black. That bumped the price from 7.99 to 9.99 for two tables. 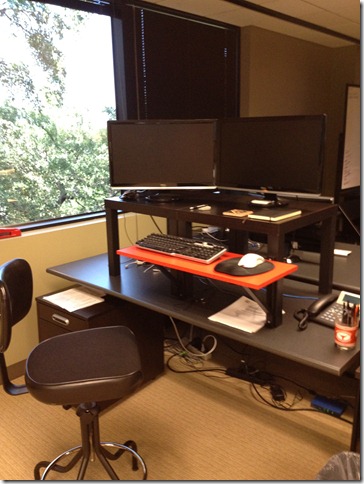 Above is the completed desk, which looks quite professional and not homemade. I used standard brackets and shelves from Ikea, and constructed the whole thing in a matter of an hour or so. The trickiest part was really figuring out how high to have the shelf, as I’m also fairly particular on the angle of my arms etc.

I tried this out for a couple of weeks, and found that I was extremely sore. Now, I work out and all that junk, but I wasn’t prepared for how tired my feet were going to be at the end of the day. I wasn’t changing my footwear to tennis shoes or Crocs or anything.

Quite a few folks on Twitter pointed me at anti-fatigue pads. Reading reviews led me to want to buy something a little nicer, so I went with the GelPro NewLife Eco-Pro commercial anti-fatigue mat. Reviews on Amazon were great, but it is a little pricey at $79.99 for the size I was looking at. This was almost 3x more expensive for the mat than my entire desk configuration. However, the reviews tend to justify the price, so that’s what I went with.

Mat = HUGE difference. If you are going for a stand-up desk, buy an anti-fatigue mat. It’s really the only way to go.

I’ve used the stand up desk now for a couple months. It was a little shaky at first – without that mat, my days felt really long. Sitting down to get in my car to drive home felt fantastic. But once I got the mat, I got rid of that barstool chair and I really haven’t felt the need to sit during the day.

I do change positions quite a bit during the day. I alternate between standing on both feet equally, or shifting weight back and forth. I was doing this anyway when I sat in a chair all day long (evidently I’ve got the jimmy legs), but now it feels a lot more natural.

But what about other benefits? To be honest, I don’t put a lot of stock in the idea that merely standing is better for your health than sitting – studies tend to show negative effects of sedentary lifestyle, but not that merely standing automatically makes you live longer (instead, a treadmill desk is a likely better choice).

I haven’t lost or gained any weight, but I already go to the gym regularly. I don’t think I sleep better, feel better or anything else. But on pure preference, I do like standing more than sitting. I sit enough at home, so it’s nice to have a chance of pace.

One thing that I do have an issue with is that my shelving is not adjustable vertically. When I got the anti-fatigue mat, it raised me standing by nearly an inch. I also recently switched keyboards, lowering the profile of my hands. My first desk wasn’t sturdy enough to hold the tables, so I switched that too.

In order to combat this, I’m looking at buying perhaps a few shelves so that they can just stack up, but I haven’t found a good flexible way to have adjustable height everything. At least one that doesn’t cost a lot of money.

Should you try it?

Sure, give it a go. It’s a small investment (about $40 for the desk, more for the mat). It’s a low-risk proposition. You can try just the desk, and if it doesn’t work, well, the trash collectors might be awfully confused.

It’s not a life-changer for me. I like it better, but it’s really just a personal preference. But that’s just one spaz’s opinion.