NServiceBus sagas, itself an implementation of the Process Manager pattern, often takes one of two main forms when implemented. It’s not a cut and dry distinction, but in general, I’ve found that saga implementations typically fall into one or the other.

The first kind would be the Observer pattern. As an Observer, this saga responds to events to coordinate an activity: 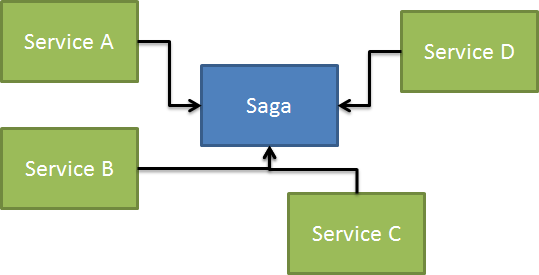 There are a few characteristics of the observer:

Since the Saga does not control message ordering and these messages are events, the saga behaves as an observer. It doesn’t influence these external services, but instead observes results through event each publishes.

Another interesting characteristic of an Observer saga is that typically, its purpose is to coordinate some activity after it has received all service events. It begins to look something like this: 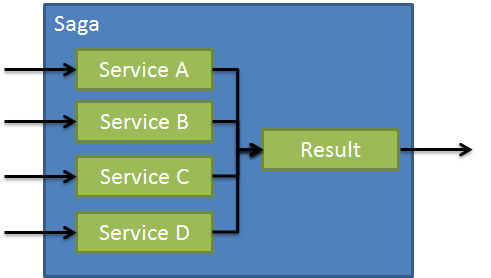 This is similar to the Scatter/Gather pattern, but not quite. The saga itself often needs to keep track of which messages are received. Upon receiving a message, it will note that the message has been received, and check to see if all relevant messages have been received before proceeding onwards.

It’s a simple workflow pattern, with the caveat that it doesn’t know which messages will be received in which order.

To see this in action, let’s look at a real-world scenario where we can observe this pattern in play.

The fun thing about learning distributed systems is that the examples of application are literally all around us. One great example of the saga observer pattern in actual real-world use is the fast food chain McDonald’s in-store ordering process.

Order preparation in McDonald’s (and many other fast food chains) is not a linear process. There are a number of stations performing work, but they do so relatively independently. In any given order, we might have: 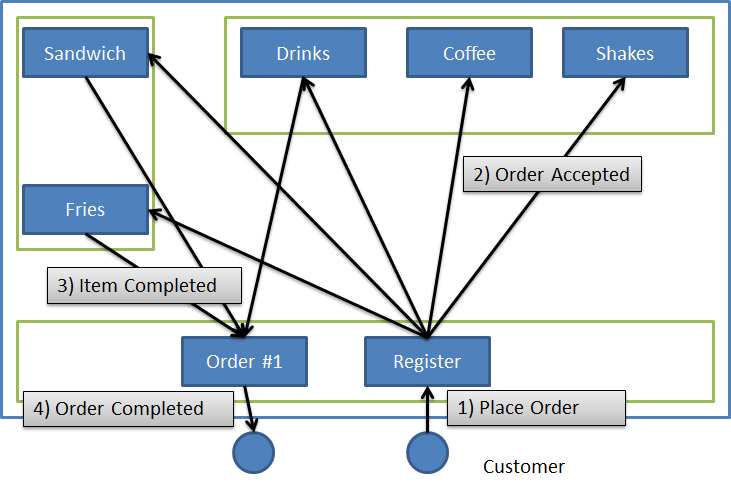 The order starts off with a customer placing an order (1). If the order is accepted (they have money), then an event is broadcasted to all relevant food preparation stations (2). Each station has a computer screen above it, representing a queue of work to be done.

Only the relevant orders show up on the relevant screens. If the order has no fries, the fry station screen does not show anything with that order.

Each station does its work independently of the other. The fry station doesn’t need information from the drink station to do its work.

As each station completes the order, they take the food back to the counter (3) – where each order to be delivered is separated by a food tray. Each station is responsible for figuring out which tray their food belongs to – correlated by the order number. On each station’s screen, orders are separated out by order number so that each station has some information to correlate a single order.

Once an employee determines that the order is complete, they call out the order number and the original customer picks up their tray (4).

Well before sagas were implemented in NServiceBus, we had observer sagas in real life (though we never called it this).

This pattern, like all others, has some benefits and drawbacks. McDonald’s implemented this pattern to maximize the efficiency of processing orders, but it’s not a universal pattern in fast food chains. The benefits include:

However, this pattern is not without its drawbacks:

Next time you go to a fast food restaurant, see if they fulfill their orders this way. In a restaurant with highly independent steps, they’ve likely determined that this method of managing orders is most efficient.

However, it’s not always the best way. In the next post, we’ll look at the converse of the observer – the controller.

← When should you test?
Elaborating on “it depends” →