Dealing with the linker in Xamarin apps

The last few months I’ve been working quite a bit with Xamarin and in particular Xamarin.Forms. I’ve got a series of posts upcoming on my exploits with that and migrating to ReactiveUI, but first things first, I actually need to deploy my app.

I’ve got my app working in debug/release mode in the simulator, and debug mode on a device. However, when I ran the app in release mode on a device, it just crashed without warning. Not a very good experience. I’ve deployed this app several times on the device, but something was causing this crash.

Typically a crash on a deployment is one of two things:

I checked the DEBUG conditional code config, which does things like point to the test/production API endpoints. That looked OK, so what else was different? 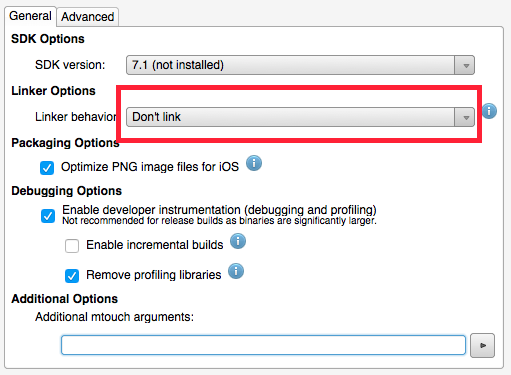 Normally, this is OK, until you get a series of telling exceptions, usually a MissingMethodException. In my case, I switched my Debug settings to the same as Release, and got:

First lesson: keep linker settings the same between build configurations. When you encounter this sort of issue, the problem is usually the same – reflection/dynamic loading of assemblies means the linker can’t see that you’re going to access some type or member until runtime. The fix is relatively simple – force a reference to the types/members in question.

In my iOS project, I have a file called “LinkerPleaseInclude.cs”, and in it, I include all types/members referenced:

Completely silly, but this reference allowed my app to run with the linker in play. More info on the linker can be found on the Xamarin documentation.