Another year of blogging, another year of inane, vapid and vacuous posts. But enough about my writing, let’s pore into the numbers behind blogging at Los Techies. We saw a departure of one of our most prolific bloggers in Derick Bailey, who finally exited after many reprimands from Pablo to “please stop trying to make JavaScript happen”. And after some notable additions to the team in 2013, we had no new additions to our group last year. I attribute this to Los Techies needing to “find itself” after the Derick Bailey debacle.

I have no idea if these numbers are good or not, but “green” seems good and “red” seems bad. Pageviews clocked in at over 4.5 million, and that seems like a big number. For comparison purposes, we had 2.5 million in 2012, growing by the same number but a slowed rate. 2014 also marked the year of the death of Google Reader, which brought our subscriber count from Some Big But Probably Wrong Number to a Smaller But Who Knows This Seems Made Up number. Time spent on LT also went down, which I’ll dig into shortly.

All time, we’ve received 15M pageviews and 11M unique pageviews, which means that between 25-30% of our traffic all time came within the past year.

How did individual posts do? In this list, we see a mix of old and new:

Well, it looks like it’s the Jimmy and Gabriel show. The top post is one about a standup desk in which I felt like the equivalent of a Picard trying to sleep on a Klingon bed. It only caused pain and I didn’t really prove anything to anyone. Gabriel’s excellent blog series on a mediocre Javascript framework generated a lot of traffic, as did a couple of my posts that just don’t seem to die. The View Models post in particular is one I’m particularly proud to have made my stamp on the world, and one of the few posts from 5+ years ago that I still look back and agree with myself.

The all time numbers are pretty funny, “one of these things is not like the others”

Many moons ago, we were hosted on a .NET blogging engine whose name I have burned from my memory. Naturally, older posts dominate the all-time list simply because they’ve had longer time to accrue pageviews, similar to old Stack Overflow answers that I’m slowly milking my way to 10K rep.

How did individual bloggers stack up? You might not ask this question, but I did, being a narcissistic sort of fella. 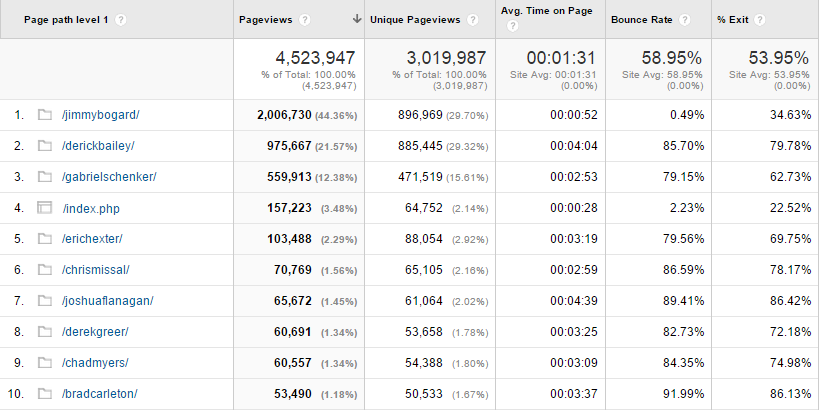 I win! Something. Interestingly, although I received over 40% of total pageviews, users only spent less than a minute on my blogs. Derick gets over 4 minutes of eyeball time. My bounce rate is waaaaaaay lower than others, but I have no idea what it means. I choose to believe it’s like a golf score, and lower is better. Or more likely, others wrote longer, more descriptive, and less ClickHole-worthy posts than I.

I’d pull up acquisition numbers, but it says that 75% of our traffic came from organic search, and 97% of that came from the search term of “(not provided)”. I can only assume this is because one of our bloggers wrote about Heartbleed, and Google retaliated by removing those inbound values.

Finally, where did our users come from? 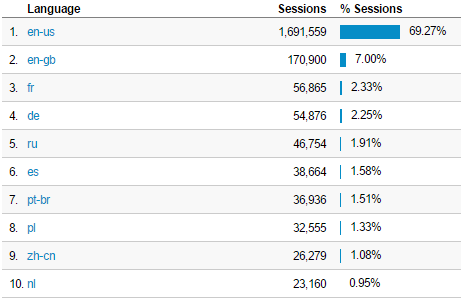 Mostly the US, but also some EU/UK, and a small number coming from across the other pond. 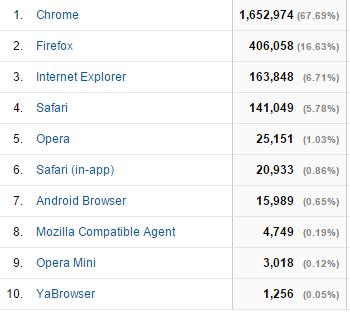 We see some unfortunate souls using “Mozilla Compatible Agent”, about the least sexy browser name I’ve seen. Waaaaaaay down the list I can see browser agents of “Do not spy on me!”. Done and done. I also see people using their game consoles, as “Nintendo Browser”, “Playstation Vita Browser” and “Playstation 3” show up on the list. I don’t know about you, but right after I’m done with yet another Skyrim session, I go straight to learning about Angular on my TV.

Interestingly enough, we don’t a lot of mobile traffic – 92% of our traffic comes straight from desktop. On the desktop, Windows beats Mac 3 to 1, and Linux 8 to 1. Of those mobile hits, about half come from iOS, 44% from Android, and the rest from Windows Phone/BlackBerry (?!). Not exactly what I expected, where supposedly mobile is a thing.

All in all, I’m proud of the content we put out this past year.  Thanks again to all of our readers, and sincerest apologies to mine. Here’s to a great new year, more great content, and if we get around to it, another Pablo’s Fiesta.