Use gitk to understand git

Moving from subversion to git can be a struggle, trying to understand what terms like checkout, commit, branch, remote, rebase all mean in the git world. I learned by experimenting in a demo repository, trying out various commands, and using gitk to visualize their impact. This post is broken up into two parts – after reading this, you may want to read the second part.

I created a simple repository on github to walk through some scenarios. I’ll start by creating a local copy of the repository: 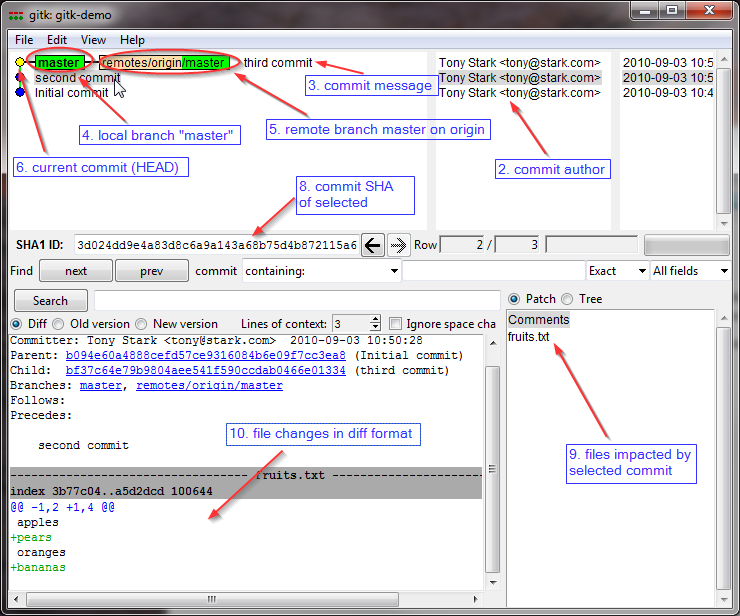 There is a lot of information in this single screenshot:

A note about “master” and “origin”

When you first create a git repository, it starts with a single branch named “master”. There is nothing special about this branch, other than it is the default. You are free to create a new one, and delete master (although, I don’t see any reason to go against the default convention).

When you first clone a git repository, git will automatically create a remote for you named “origin”. A remote is just a name used to manage references (URLs) to other repositories. There is nothing special about the “origin” remote, other than it is created for you. You are free to create a new one and delete origin. In fact, if you are working with multiple remotes, I recommend you delete the origin remote and create a new one for the same repository, but using a more descriptive name. For example, when I work with the FubuMVC source code, in my local repository I have a remote named “darth” which refers to the main repository owned by DarthFubuMVC, and a remote named “josh”, which refers to my fork. If I had kept the name “origin”, I would always have to remember which one I cloned from.

What happens when I create a branch? 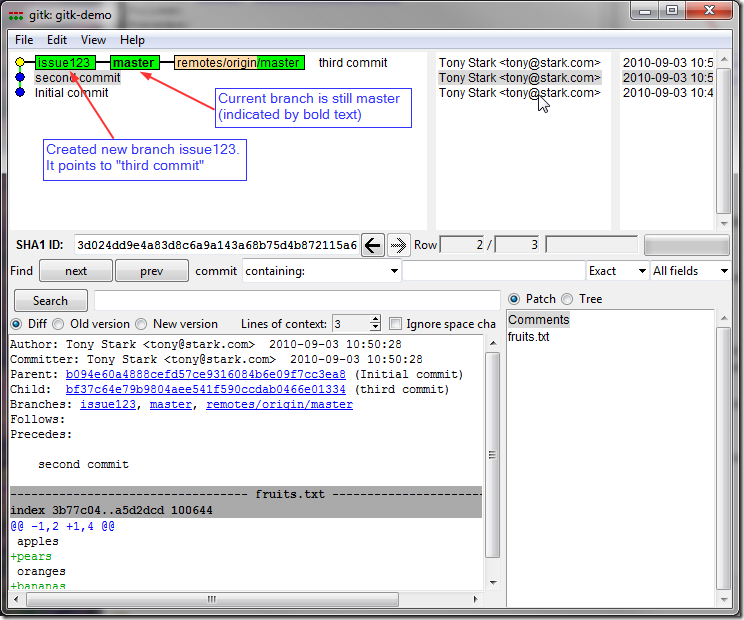 We see the new branch marker for the issue123 branch points to the same commit as master and origina/master. It is important to note that the “master” is bold, indicating that is still the current branch. The bold branch label is equivalent to the asterisk in the command line output:

Now if I switch to the new branch and refresh gitk:

(We’re going to focus on information in the top pane from now on, so I’ll hide the bottom part of gitk) 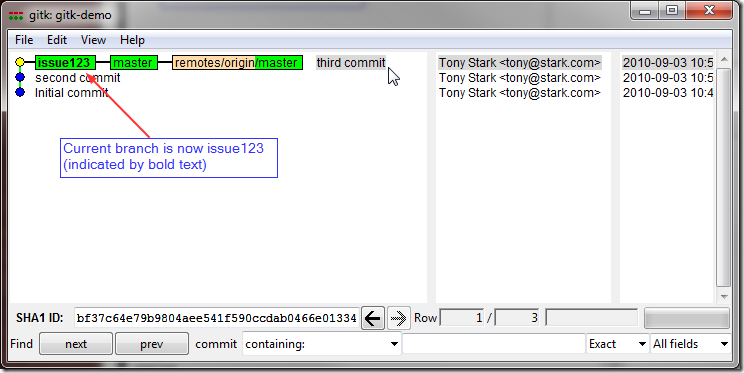 Note: For convenience, I could have created and switched to the new branch in a single command: git checkout –b issue123

When I refer to the “current branch”, I mean “the branch that will advance when I perform a commit”. This is where the gitk visualization really starts to help. I’ll make some changes to a file and then commit with the message “My first commit”:

The issue123 branch now points to my new commit. Neither the master nor origin/master branch pointers have moved.

As I continue to commit, the current branch pointer moves with me: 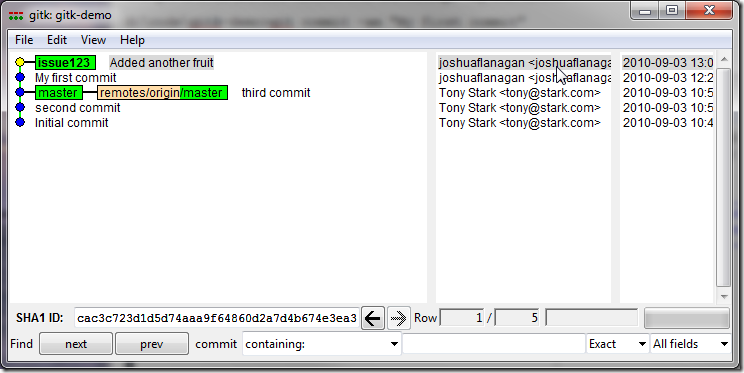 But I thought it was a branch

Since I was working in a branch, I expected to see a tree stucture, with nodes turning off from the main “trunk”. Something like this: 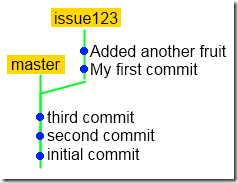 Instead, gitk shows all of the commits as a single straight line. When first using git, this was very confusing to me. My confusion stemmed from my misunderstanding of branches in git. Thinking about why gitk was showing all of the commits in a straight line finally brought the point home. In git, a branch is a label for a commit. The label moves to new commits as they are created. When you create a git branch, you are not changing anything in the structure of the repository or the source tree. You are just creating a new label.

After completing my work in the issue123 branch, I’ll want to merge the changes back into master. Usually when I think of a merge, I think of comparing two trees and applying the differences from one onto the other. I imagine each commit being replayed on the other branch. Merging issue123 into master would require applying each of my two commits to the master branch. However, this work has already been done, when I first performed the commits. Because the master label hasn’t moved since my work began on issue123, applying the diffs would end up with the same result. This is where the “single straight line” visualization really proves valuable – I can see that issue123 is directly ahead of master. Git is smart enough to recognize this situation and performs what it calls a fast-forward merge. A fast-forward merge isn’t really a merge at all – since no file content comparisons are necessary – it simply moves the master branch label up to point to the commit pointed at by the issue123 label.

To merge the changes from issue123 into master, I first checkout (switch to) the master branch and then do the merge: 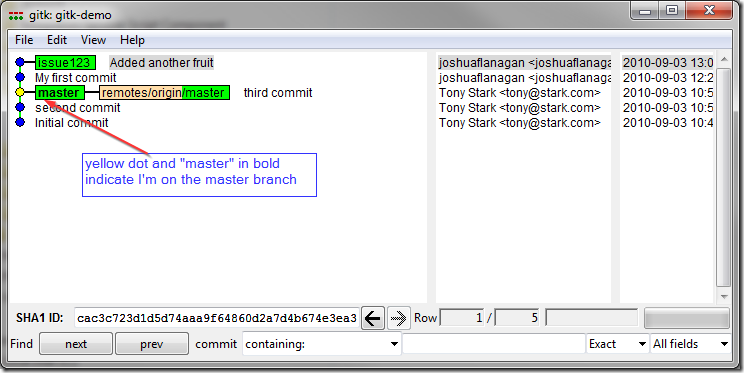 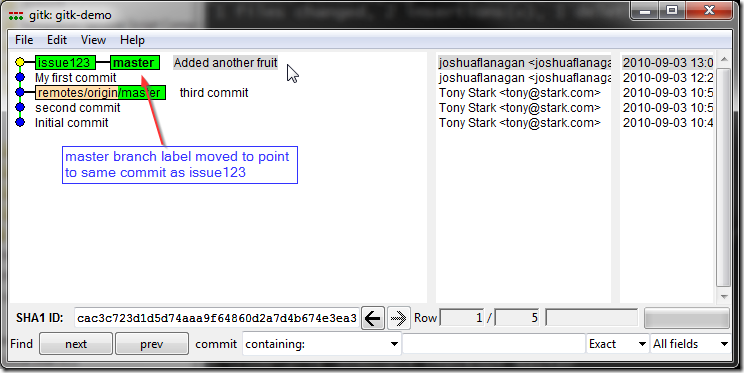 A few things to notice:

The issue123 branch label is now redundant, since it points to the same commit as master. If there is no more work to do for issue123, we can safely get rid of the branch, without losing any historical information. If we later find out we need to make some changes to solve the issue, we can always create another branch (which is just a label). This is what it means when people say that branching in git is easy or lightweight.

Sharing with the world

As noted above, everything we’ve done so far has been in our local copy of the repository. The “master” branch at the “origin” remote has not moved. If I look at the github page for the repo, I can confirm that none of my commits exist.

To copy changes from my instance of the repository up to github’s servers, I need to push from my master branch to the “master” branch of my remote named “origin”. 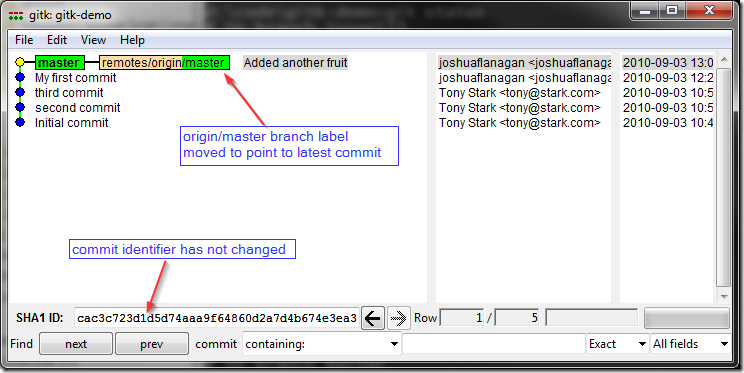 Take note of the SHA1 ID of the latest commit, cac3c723…. Look back at the previous screenshots and notice that this identifier has not changed through all of the operations (merge, deleting the branch, etc). When we refresh the github page, we can see it has updated with all of the work I did locally. Notice the commit identifier on the web page matches up with the SHA1 ID we see locally. Also, there is no indication that any of the work was done on a separate branch – nobody ever needs to know. You are free to branch as much as you want locally without impacting a shared repository. 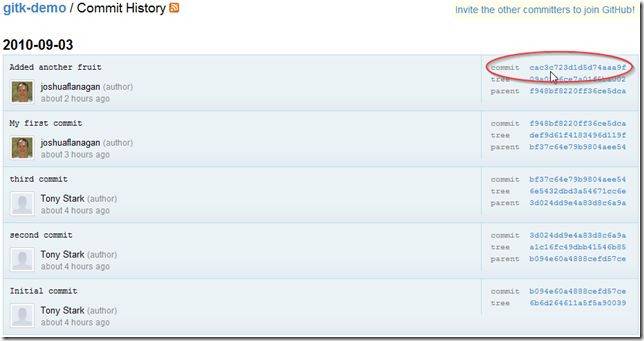 Continue to part 2 to see the difference between merge and rebase.