I recently had to setup a build server for some rails work I’m doing. Still wanting to support my other projects I setup Jenkins. I ran into several issues.

Running Jenkins as a hidden user

First I noticed that jenkins was running as the “daemon” user, this obviously wasn’t going to work for github and rvm needs. So I did some googling and had some guides to get Jenkins running as a specific user. I did the following (sourced from http://colonelpanic.net/2011/06/jenkins-on-mac-os-x-git-w-ssh-public-key/ ).

Note: That’s really $PASSWORD up above. This gives you a prompt to enter that password. Next you’ll need to stop the Jenkins service and edit the plist and start the service back up. 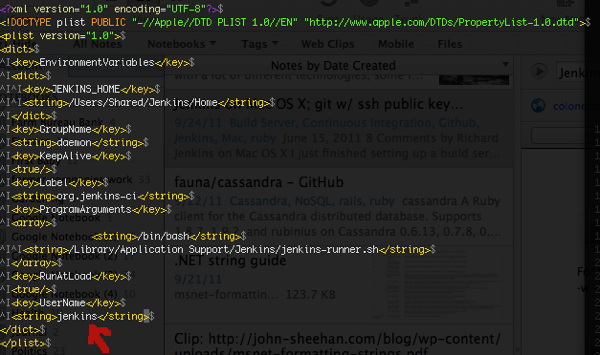 Now my next issue was despite what I’d read elsewhere I was unable to get Jenkins to use the default ruby provided by RVM. So I just pasted the commands that I would run anyway in the “Execute Shell” build step.

Getting Jenkins to see tests

I’ve been using Test:Unit/Minitest lately just to keep more consistent with my day to day work. However I haven’t found a way to get my tests to show when using the “Execute Shell” task. I found a little gem called ci_reporter that exports to the standard junit format, unfortunately it doesn’t work with minitest yet. That’s ok I haven’t done anything that Test:Unit doesn’t support so far so I added the the following to my Gemfile (note the part about unit-test 2.0):

Running “rake ci:setup:testunit test” should give you a bunch of xml files in tests/reports. Now we need to tell Jenkins where to find those reports so add a post build action to pick them up as junit reports.

This was pretty easy.

This took a fair amount of time, but the end result was quite satisfying. I now have CI with tests, tests coverage, RVM to target different versions of Ruby and bundler to make sure my Gem environment is sane.