How We Do Things – The Team Room

This is part 8 of the How We Do Things series.

Everyone should basically know what a team room is by now, so this post is going to just be a look into how we set ours up, how we got the team to buy in to the change from private cubicles, what we’ve noticed since creating the team room, and my thoughts on privacy and productivity.

When we first started growing our team, we were scattered about. A few of us had private offices, the rest were in cubicles with high walls. As we increased staff, I began to look at some alternatives to this situation. The space allocated to me was a rectangular room about 54’X18′ with an adjacent office that was about 15′ square. Not a lot to work with in a traditional cube setup, which is what I was asked to pursue. So I took this as an opportunity to build the team room I had been wanting.

What we came up with is “pods” of 3 desks each, with about 1′ mesh dividers above the desk surface. This gave everyone their own desk, and their own little area, but they were still together, and everyone could see and freely talk to everyone else. 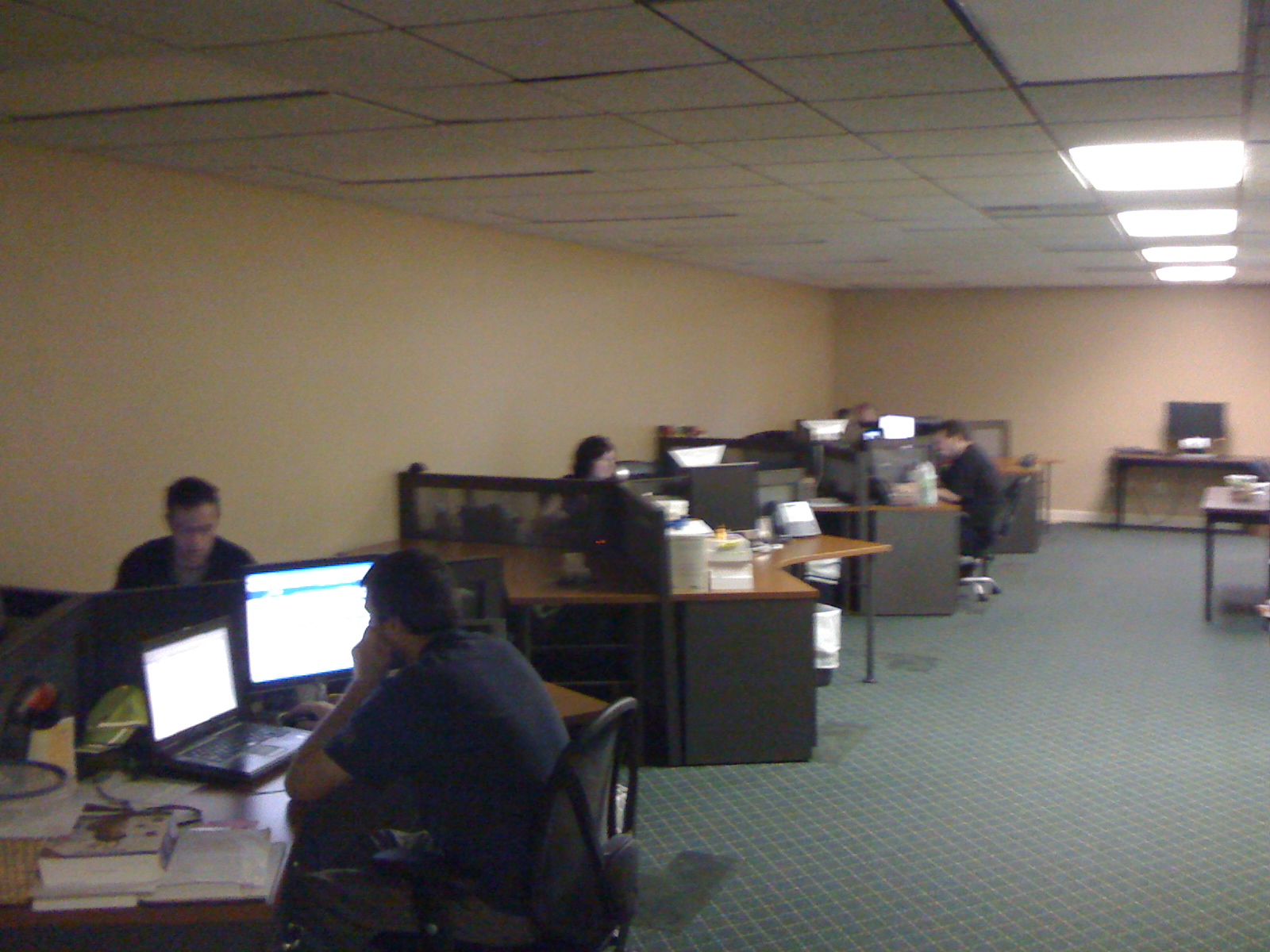 Steve Harman once asked on twitter if private desks were anti-productive, and I answered that I didn’t think so when used appropriately. I know a lot of team rooms just do the flat table thing and everyone sits shoulder to shoulder at all times. That’s fine, I guess, and great for pairing, but people do need a place of their own. Someplace they can check email and their bank account without everyone looking over their shoulder. Someplace where they can put their knick-knacks. People like desk drawers to store things in. It’s psychology 101. People need a little space. At least the people on my team do.

One of the problems with some of the things we do in agile-type software is that we ignore the human factor, we ignore team dynamics and personalities, and try to make everyone the same. This is probably at least partly why a lot of teams push back on these practices, and why they end up falling down.

So we compromised, and people got private desks that were put together in such a way as to not hinder the “team” aspect of the team room. And I think it’s worked well.

We outfitted the team room with plenty of whiteboard action: 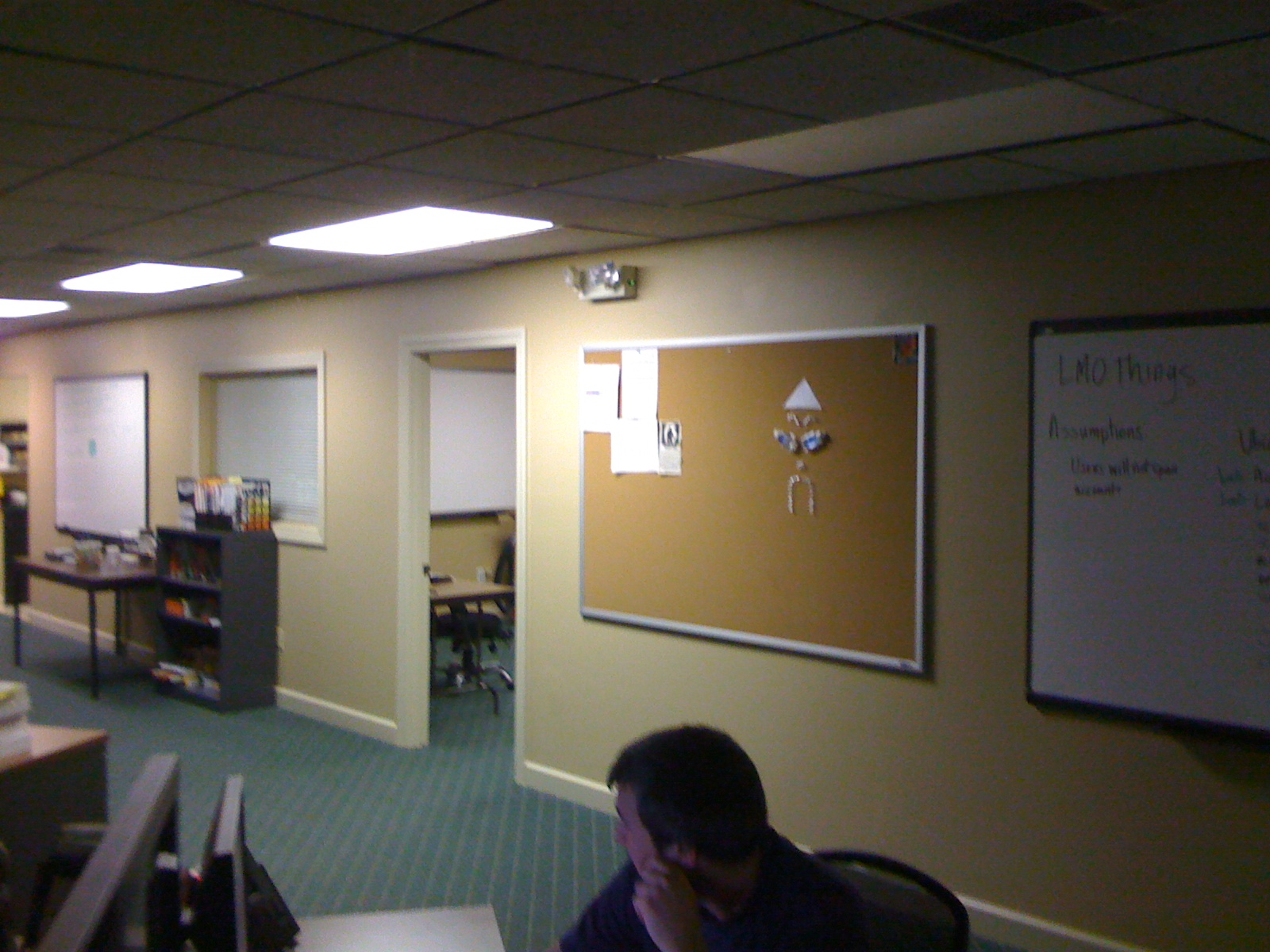 It’s important to have a lot of areas where people can collaborate and try out ideas. In addition to the team room we also have a “conference room” for just us that is separate, has a whiteboard and a nice projector, where people can gather and do design and planning sessions.

Since the desks aren’t really conducive to long-term pair programming, we set up a pairing station at the end of the team room, and we turned the extra office into what we call “pairing jail”. Pairing jail has two pairing stations and another whiteboard, plus all the equipment we need to test our hardware integrations (microscope, camera, barcode scanners, etc). 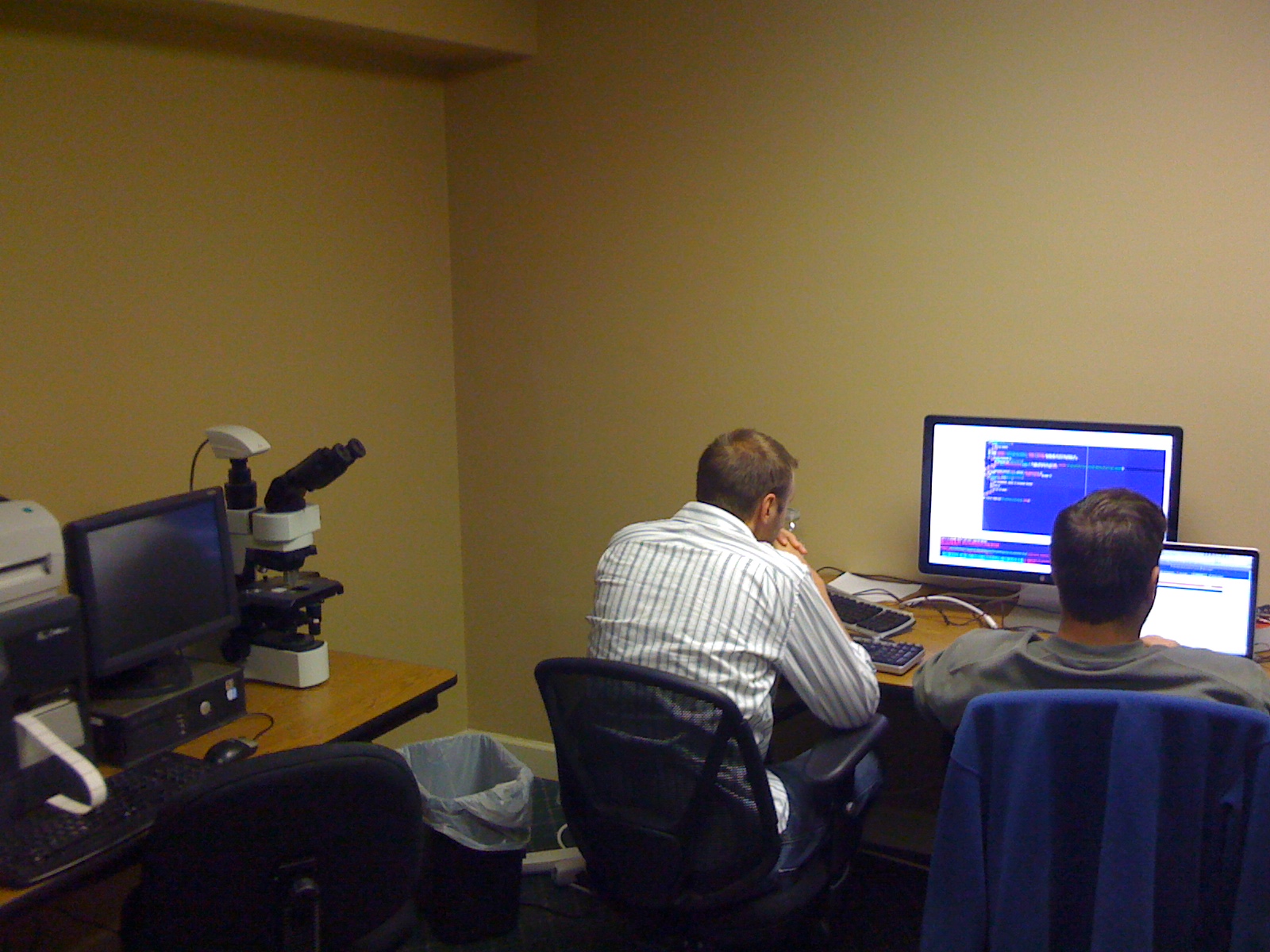 Each pairing station has a 24″ monitor, extra keyboards and mice, and is a nice flat surface people can work on.

This is the compromise between pair programming and private desks. We pair most features, and most of the developers are pairing about 5-6 hours a day. However, we have an uneven number of developers, and sometimes people are working on something on their own, or spiking something, or just doing whatever else, and having a semi-private space keeps morale up.

We also work on a few different projects simultaneously, which makes the separated pairing room nice. That room usually becomes the war room for the two pairs working on the biggest thing, so they can have all their conversations and whiteboard sessions without interfering with the conversations of the third pair who is working on something totally different. It works for us.

At first there was resistance to the team room concept, and I’m sure a lot of people come up against this. To overcome the objections I did the simplest thing that could possibly work: I gave up my office and sat in the team room. When the boss gives up his office, people are less likely to complain about sharing space. Then they get used to it. Then, over time, they see the value, and the organic process of gelling a team happens.

There was also resistance externally to the idea at first (and still some today, a couple of years later). Other managers at my level didn’t understand why I left my office for a desk in this room, and I took a lot of not-so-subtle teasing for it. People didn’t understand the collaborative nature of a team room, because corporate America is used to peons in cubes, managers in offices, and communication via email and scheduled meetings. This is just something people have to get over or not. I stopped caring. The results spoke for themselves. Don’t let the sheep drag you down.

Not everyone has the perfect big room for a team room, I didn’t. You have to find a way to work with the space you have, be creative. The most important thing is getting the team together, in the same place, and removing the barriers.

A team isn’t built overnight. It takes time. When people aren’t used to a team environment, a collaborative environment, you can’t just throw them together at desks and expect magic. It’s a process. I will say that since we put the team room in place, after the first month or so, it’s been amazing. People communicate. They talk. They whiteboard. They get together at each others’ desks for impromptu design sessions. They pair on things they weren’t even planning to pair on. They collaborate. Without the team room in place we would not be where we are today with either our process or our practices.

← How We Do Things – Specification (Using the right tools)