DI and IoC: Creating And Working With A Cloud Of Objects

A few months ago, I posted some thoughts and questions on the proper use of Inversion of Control (IoC) containers and the Dependency Inversion (DI) principle. Since then, I’ve had the opportunity to do some additional study and teaching of DI, and I’ve had that light bulb moment for the proper use of an IoC container. I haven’t talked about it or tried to present the info to my team(s) yet, because I had not verified my thoughts were on the right track – until recently. I got to spend a few hours at the Dovetail office with Chad, Jeremy, Josh, etc, and had the pleasure of being able to pick their brains on some of the questions and thoughts that I’ve had around DI and IoC. In the end, Chad confirmed some of my current thoughts and helped me put into a metaphor that I find to be very useful in understanding what Dependency Inversion really is – a cloud objects that can be strung together into the necessary hierarchy, at runtime.

By introducing a better abstraction for each class and putting Dependency Inversion into play, we can break the spaghetti mess apart and introduce the ability to use any of these individual classes without requiring the specific implementation of the dependent class. 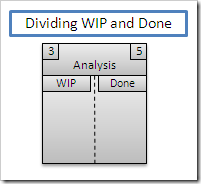 Now that we have an interface that both of these classes can depend on, instead of the explicit implementation of the child object, we need to have the expected child object implement the interface in question. For example, we expect ThatClass to be used by ThisClass, so we will want ThatClass to implement the IDoSomething interface. By the same notion, we want AnotherClass to implement the IWhatever interface. This will allow us to provide AnotherClass as the dependency implementation for ThatClass. Our object model now looks like this:

What we have now is not just a set of classes that all depend on each other, but a “cloud” of objects with dependencies and interface implementations that will let us build the hierarchy we need, when we need it.

The real beauty of this is that we no longer have to care about the implementation specifics of IDoSomething from ThisClass. ThisClass can focus entirely on doing it’s duty and calling into IDoSomething when it needs to. And, by passing in the dependency as an abstraction, we’re able to replace the dependency implementation at any time – runtime, unit test time, etc. This also makes our system much easier to learn and understand, and most importantly – easier to change.

Now that we have our cloud of implementations and abstractions in place, we will need to reconstruct the hierarchy that we want so we can call into ThisClass and have it perform it’s operations. Here’s where Dependency Inversion meets up with Inversion of Control.