I previously covered the overview and architecture for a home automation application using signalR, knockoutJS, and asp.net mvc in previous posts. In this post I will dive into the sequence diagram of how a ui interaction, to turn on a light bulb sends messages through the application.

I will walk through the technical portion of a simple user story.

As the home owner, I want to turn on my light from my phone before I get home and walk in the door, so that I don’t trip over the dog.

This is what the storyboard looks like in for the application.

This is the user interface interaction which starts this event in the application.

Above, I have outlined the story board in which, the user navigates to the application from their phone, and they then click on a button in the application. When they walk in the door, they are delighted by how far technology has come. 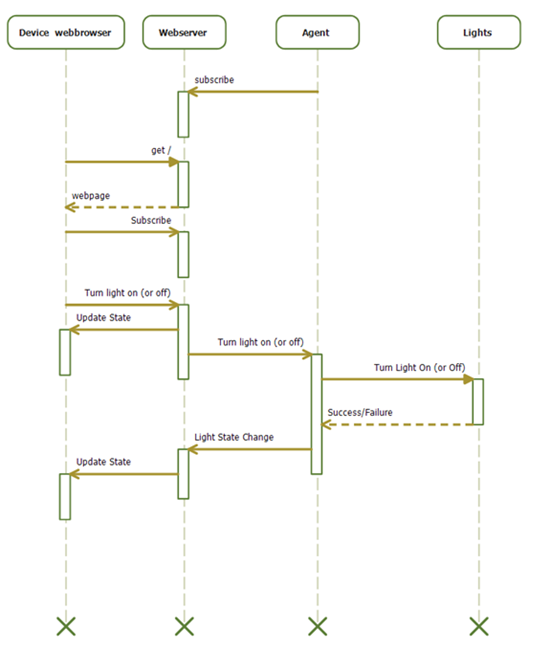 Sequence diagram of the startup, page load, and light on interaction.

The figure above shows a few interesting system interactions.

The use of the publish/subscribe and messaging patterns helps the application present a more cohesive and responsive feeling to users who may change the state from a phone, but also have a tablet running in their kitchen.

The nature of using signalR as a message bus to publish events and allow various components of the application subscribe to those events allows the application to decouple each component in a healthy way. Making some assumptive events in addition to making corrective events in the case of a failure of a particular command, like turn on the light, are really easy and clean in terms of the implementation using SignalR.

In the next post, I will walk through the code in this scenario in details.