Our clients install our product on different environments. Some of them have 32bit server OS others have pure 64bit environments. Due to the lack of a 64bit version of a driver we use we have to run certain tools in 32bit mode. But since we do not want to have multiple versions of our product we had to find a possibility to force a .NET (command line) tool to run as a 32bit process on a 64bit OS (e.g. Windows Server 2003/2008).

The simplest solution is to set the Platform Target to be x86 on the project properties (build register). 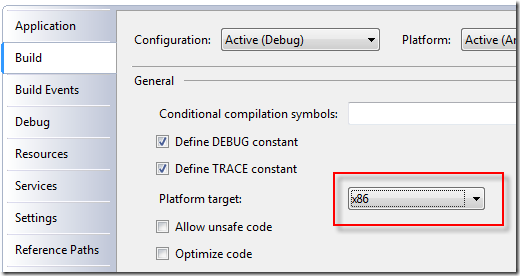 This will cause the compiler to set the 32Bit flag in the CLR header of the corresponding assembly. Every time we run this application no matter on what type of OS it will execute as a 32bit process. But this solution although simple and straight forward was not a viable solution for us since – as mentioned above – we want to have one and only one version of our product. Thus all components of our package have to be compiled with Platform Target set to Any CPU.

Run in the context of IIS

If the application is running in the context of IIS then we can instruct IIS to run the application in a 32bit process. Of course this solution is not the right one for a command line tool…

Use corflags.exe to set the bitness

You can flip the 32-bit flag on the assembly after-the-fact using a tool called CorFlags.exe, but that’s probably not a good idea for a long-term sustainable option. For the details about how to use CorFlags.exe see this link. E.g. to set the 32Bit flag open the Visual Studio command prompt, navigate to the directory where your assembly is and use this command

and to turn off  the 32Bit flag it would be

The solution we finally adapted was to build a shallow wrapper application whose platform target is set to x86 and which does nothing else than call the respective application. As already mentioned earlier the application is a command line tool and as such has an entry point defined as follows

But as always, having a solution makes you want to have more. What if we could create a generic 32bit wrapper application that can call any (command line) tool and force it to run in a 32bit process?

What we finally came up is as simple as this

Note that for brevity I omitted the code to validate the command line parameters.