Unfortunately there doesn’t yet exist any decent profiler for Silverlight applications. This fact inspired me to write my own profiler which is able to profile any member of any assembly of our solution and help me track down performance bottlenecks and other potential problems of our applications.

In part one of this post series I showed how we can use Mono Cecil to instrument any (compiled) assembly and thus prepare it for being profiled. In this second part I want to discuss what data we collect as well as how we collect the data. And finally we show a way how to dump the data generated by the profiler to a pre-defined output where it can be used for further analysis. The analysis part of the profiler I will discuss in part 3 of the post series.

What data to collect

Instrumenting an assembly is one thing but the other important thing is to collect meaningful data. Profiling is all about how the application behaves during run time and how the various operations perform. 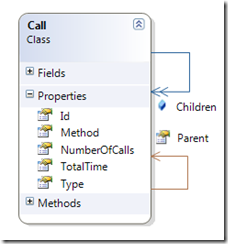 Each application has a well defined single entry point which is called by the assembly loader upon start of the application. Starting from this entry point or start method other methods are called which in turn call again other methods. In the end we have a tree of calls. Thus our data structure must also be a tree structure.

I have defined a class Call which contains all data I want to collect for a single node of my call tree. Each call has a unique id and a collection of child nodes of type Call. For easier navigation I also provide a backward link to the parent of each call that is to its  caller.

For each method(or call) I register the total time spent inside this method as well as the type in which this method is defined and the meta information of the current method. I also register the number of times a method is called by its parent.

Certainly there might be other interesting data to collect, but for our purposes this was enough.

Please be aware that a fully instrumented application produces a huge amount of profiling data. In our case running the application for only a couple of seconds produced several 10 thousands of nodes. Also be aware that profiling an application has a significant impact on its performance. I strongly advise that you do not use this profiler or this technique in production but only on your developer machine or on a test system.

In the first part of this post series I have shown how we can instrument any assembly with the aid of Mono Cecil such as that any method call in the respective assembly can be intercepted. In our case I just inserted a call to an external profiler class at the beginning and at the end of each method.

The code inserted at the beginning of each method was

and the one at the end

Let’s now analyzed the code inside those methods. First the WhenEnteringMethod

As the very first operation we save the current time and then we determine the MethodBase (meta information) of the method that called us. We use the StackFrame class to provide us this information.

By using our internal stack we are now able to retrieve the caller of the intercepted method. We call this the parent call. If there is no call on the stack we are obviously at the very beginning of the call chain and thus we return the root call object.

Now it is possible that the parent call calls another method more than once. If so then its children collection would already contain this call and thus we have to use it. Otherwise we create a new call object and store it in the parent calls children collection. When defining a new call object we provide it the MethodBase object as well as the Type in which the method is defined. We also increase the number of calls to this specific method and set the recorded enter time. Finally we push the call object onto our stack.

The second method is rather trivial

we just pop the current call from the stack and feed it with the current time which defines the method exit time. That’s all!

Unfortunately we are not done yet. There is one little call in the above code that hides some complexity. It is the RootCall and the Stack property. The logic inside the property getter is

for the root call and for the stack it is

As you can see these are just two lazy instantiated properties but in this case it is important since we deal with a multi threaded application. We define the rootCall field as follows

in a similar way we define our internal stack

Please note the [ThreadStatic] attribute on the two fields. This attribute guarantees us that we collect the data for each thread separately. The attribute defines that the corresponding static fields are not globally static but only static per thread. In a subsequent part of this series I will discuss the code modifications needed to retrieve the profiling data for all threads. At the moment we are only interested in the profiling data of the main thread (i.e. the UI thread).

In a Silverlight application the possibility to store data in the file system of the client are rather limited. This is by design due to security reasons. In our case we decided to provide a special key combination to the Silverlight client which will then dump the profiling data as an xml document to a textbox in a popup dialog. From there we can copy the output to any text editor (e.g. Notepad++), manipulate it if needed and save it to the file system.

The HandleOutput method opens a modal dialog which contains a textbox into which we write the profiler output.

The custom designed ModalDialog class is using the Popup class of Silverlight to display a dialog like window on top of the browser.

In our company we have implemented a Silverlight profiler to be able to track performance bottlenecks and other potential problems in our solution. In part two of this post series I have show you what data we collect with our profiler and how we collect this data. Furthermore I have discussed a possible way to extract the profiling data for further use in a analysis tool which I will discuss in part three of this series.